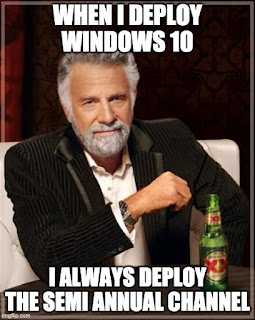 Windows 10 comes in all kinds of variations. If you have ever run Windows 10 in a virtual desktop capacity there has no doubt been a consideration of using the Long Term Service Channel (LTSC) as opposed to the Semi-Annual Channel (SAC) that is traditionally used on physical endpoints. The two supported versions of LTSC out there as of this posting are Windows 10 1607 LTSB (this was the channel name before Microsoft changed it from Branch to Channel) and 1809 LTSC. As you see, these are locked in time versions of Windows 10 that have 5 years of support before upgrades are needed and if/when upgrades are performed and you can leapfrog from one version of LTSC to another version of LTSC to remain supported. The Semi-Annual Channel has servicing timeline of 18 months from release. Meaning you should be off that particular version 18 months after it is released to maintain support. If we look at the benefits of LTSC vs SAC, we can clearly see some very appealing things for it.
Here are examples of the big ones:
These few items have had administrators and engineers spend countless hours over the years trying to disable them in their virtual desktop environments via scripts, registry changes and disabling services. If we take a step back and look at it, running Windows 10 LTSC gives all of the good things and none of the bad things of running Windows 10 as a virtual desktop. I used to make the comparison as running Windows 7 with a Windows 10 wrapper and if you were running LTSC in your virtual desktop environment you were probably very happy.
Then on February 1st 2018, Microsoft had to come to mess it all up. They posted an article stating that Office 365 Pro Plus would no longer be supported on any version of Windows 10 LTSC effective January 14th 2020. With the wide adoption of Office 365 and the availability of E3/G3 or E5/G5 licensing and the ability to download the offline office clients from these subscriptions it is imperative to maintain support. Microsoft has always taken a stance that LTSC should only be used where the key requirement is that functionality and features don’t change over time. Examples include kiosks, medical systems, industrial process controllers, and air traffic control devices. These systems can have very detrimental effects on functionality if upgraded or are systems that do not have the ability to be updated due to security and network related reasons.
This caused panic and a need to pivot for the IT departments to shift away from LTSC back to the SAC and now administrators and engineers needed figure out a way to be able to test/accommodate these updates to prevent any issues in their virtual desktop environment.
The long story short or TLDR version of this. When deciding if LTSC or SAC version of Windows 10. This really should be a no-brainer and SAC is the only way to go. For those that say they will never go to Office 365 from their on-prem exchange as I have all of these requirements that prevent it, all I can say is “never say never”. You do not want to be reason why an entire environment is not supported and become the bottleneck towards environmental progress. If you are working with a VAR/partner and they tell you that LTSC is the way to go for your virtual desktop image, you may want to re-evaluate that partner as they may be leading you down a bad path.
Johnny @mrjohnnyma
8.5.7
Tweet
Posted by Johnny Ma at 8:36 AM 2 comments Labels: citrix, horizon, Johnny Ma, VDI, win10, Windows 10