Written by founders of 37signals, Jason Fried and David Heinemeier Hansson, this book explores the rise of "work from home" employment.  37signals are the makers of the wildly popular project management and collaboration tool Basecamp and for years have worked at a remote-first company with employees spanning the globe.  In their opinion, having an office is a privilege and not a right. 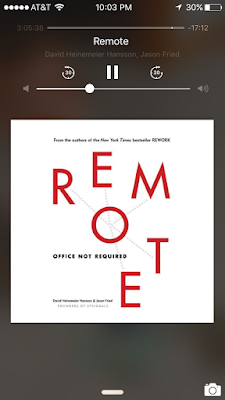 Remote will appeal to anyone who has the desire to work remotely.  The intro chapters dig into the positive benefits and how to pitch remote work to your boss.  It is not all roses and they do a fair job laying out what you need to be effective outside of the office.

I was attracted to Remote because from 2002 to 2009 I worked 100% remote.  I was part of a team responsible for new client integration for a financial services company.  This meant that I typically traveled two to three weeks a month and spent the rest of the time working from home.


"While nobody on their deathbed wishes they spent more time at the office..."

I would like to tell you that I asked my boss to work remote to support my move from Wisconsin to Colorado and that was that but it actually happened in a more unexpected way.  It had occurred to me that my role was ideal for remote work considering we rarely had new clients in town, but only causally mentioned it to my boss as I gave my two weeks notice.  With three days left, my boss pulled me aside and told me management was concerned about replacing me and wanted me to try it out for two weeks once I arrived in Colorado.  Obviously, it worked in the long run but there were many challenges along the way.  Challenges I could have been much better prepared for if I had read this book (ignoring the fact it was written eleven years too late).  There is an anecdote in the book about dealing with a crappy conference room phone which reminded me of the time I, the sole remote employee, halted a large meeting to explain to the room that the extensions coming off the main conference phone were not speakers but instead microphones and that the person tapping one with a pen really needed to stop.  This still makes me uncomfortable recalling the incident but I figured next time it would be a client on the other end of the phone.  Remote goes on to explain how hard it is to only have part of the staff have the option to work remote.  A better strategy is to make sure that a large percentage of the team or group including management experience working remote.  This will ensure that remote employees are not treated as second class citizens.

There appears to be a natural cycle of emotions about the opportunity to work remotely.  For me, it started as an exhilarating sense of freedom and relief to work with "no one watching" but ebbed into a disconnected and lonely existence.  As time passed, it just became normal and part of my routine and I found ways to counter the loneliness.  The most common comment I got at the time was amazement that I could be productive because they were sure they would not be able to.  The comment always struck me as odd at the time and even more so now.  There is always only one person responsible for you being productive whether you are in an office or not--and that person is you.

Even if you work in a traditional office there are some very interesting ideas to be taken away from this book.  37signals was forced to learn how to collaborate and communicate with their 100% distributed workforce.  Some of the tools and ideas they developed are likely a more effective way to get work done even if you are only down the hall from a coworker.  For example, they are big fans of screen sharing tools like GoToMeeting and WebEx and almost never have a meeting without them running.


Available:
Amazon Kindle and Audible (reviewed) and others